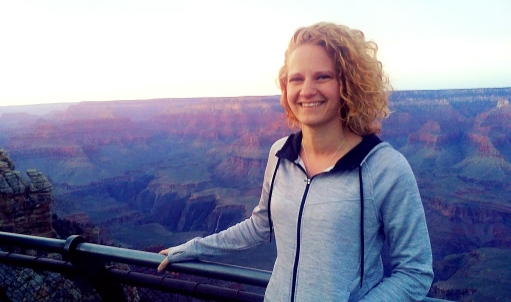 ARIZONA (March 2017) – Apparently, my memory lagged as my older brother reminded me it had been longer than three years since I visited him in Phoenix. He made it clear, it had been five years. *rolls eyes* My one and only trip to Arizona was in the spring of 2012 visiting him while attending the Cactus League spring training for ball games and autographs.

Nearly a full-time student and employee, I rarely get the opportunity to travel so when I do, I’d rather travel somewhere new and explore unknown territory–seeking new adventures and creating significant stories to share. So, I asked my brother if him and his girlfriend would take me to the Grand Canyon if I visited for spring break. I wasn’t expecting an immediate yes, but that’s what I got. Wow. Now the ball was in my court. I purchased my plane tickets and realized there’s no turning back (Ouch, flying out the same day most Texans are on spring break dents your wallet, but I knew it’d be worth it).

This spring break, I’m flying to Phoenix and road-tripping to one of the seven natural wonders of the world, I thought. I could barely contain my excitement.

That is, until my brother called and explained that we’re going to hike down into the Grand Canyon and back out.

A few years ago, my other two siblings successfully tackled this feat with my older brother and his girlfriend, who are experienced hikers. I heard my siblings’ horror stories afterward, which explained my hesitancy listening to my elder brother tell me he had already booked our hotel room for a night on the outskirts of the Grand Canyon and the following morning we would spend the day hiking that massive crevasse over a mile deep. Obviously, you can’t just walk straight down into the canyon; you access trails constructed of switchbacks. We planned to hike the popular Bright Angel Trail located at the south rim of the Grand Canyon. Our destination was Indian Garden, 4.9 miles into the canyon, over half-way to the base where the Colorado River flows. That’s 9.8 miles round trip.

“You work out still, right?” my brother asked. “Uh, yeah,” I lied. Let’s just say returning to the gym four days before my flight out of Dallas wouldn’t help my first step into the canyon.

After learning that my sight-seeing-of-the-Grand-Canyon trip had turned into a hiking-the-Grand-Canyon-and-hoping-I-don’t-fall-in-and-die trip, I didn’t acquire much sleep that night. But the following day, after talking to a close friend who had previously accomplished the hike, I opened myself to the possibility of an awesome adventure awaiting me.

First, I had never really hiked before, so what better way to experience it then hiking this beast? “Go big or go home,” right? Second, after I turned 30, I promised myself I wouldn’t back down from a challenge and here it awaited. And third, I craved adventure. I longed to experience nature again. It had been too long since I was out in it. Here was my opportunity. I was all in. I was going to hike the grandest of canyons in the world.

On Friday, March 10, after rushing out of my classes and embracing the smell of spring break in the air, I loaded my luggage, was dropped off at the airport and sat in my terminal anxiously awaiting to board my plane.

My favorite part about Arizona is seeing the mountains. Ahem. I mean, my second favorite thing after seeing my brother and his girlfriend is the view of the mountains. I grew up in the Midwest and now reside in the flat state of Texas, so I tend to fill my phone’s storage capacity with pictures of these big rocks while visiting AZ. Unfortunately, it was dark when my plane landed, but the next morning, on our way to Texas Rangers’ spring training camp with my older siblings, I caught a glimpse of mountain majesty.

Before my older brother and I parted ways with my sister, who chose to stay behind to attend more spring training games, it’s worth mentioning where they pressured me to eat lunch–Chino Bandido. They love this place. Unfortunately, my stomach didn’t agree. As didn’t my understanding for combining Chinese and Mexican food onto one plate. But luckily, I wasn’t hiking the Canyon until the following morning.

My brother and I met his girlfriend and climbed into her Volkswagen for a four-hour road trip to the Grand Canyon. Excitement and anxiety began to swirl inside my stomach. Our trip consisted of political podcasts, St. Louis Cardinals and Grand Canyon trivia. I also witnessed the landscape transform from this… 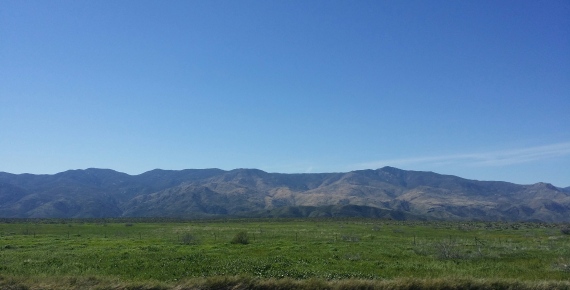 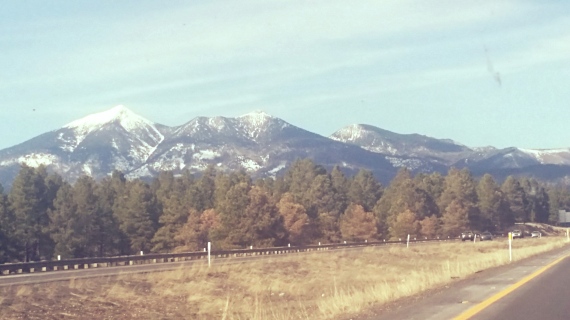 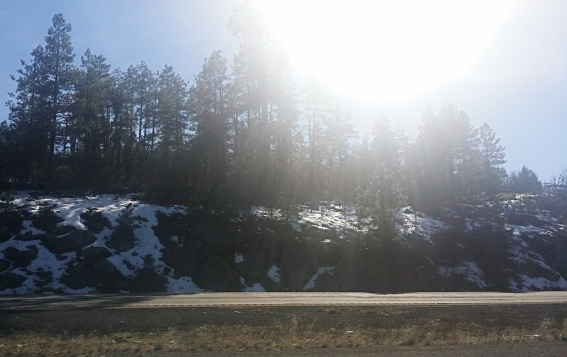 We stopped in Flagstaff for a snack, to sight-see and purchase food for our GC hike the following day. What a hip city. I fell in love with Flagstaff before I even found this gnarly, poetry phone booth. Unfortunately, it wasn’t for sale.

I didn’t think I’d get to see the Grand Canyon until the next morning, but we approached the national park as the sun began to set and my brother asked if I wanted to go ahead and see it.

Before he could finish his question I had already exclaimed, “YES!”

We couldn’t reach the parking lot fast enough. I jumped out of the car and threw a sweatshirt on–goodbye, 80-degree Phoenix (elevation: 1,086′), hello, 40-degree Grand Canyon (elevation: 6,800′). We found a heavily populated path, which seemed to curve and split into several others. There were too many trees. Where was the canyon, all ready?! And then out of nowhere, the grandest hole I’d ever laid eyes on.

The sun colored the sky with yellow, orange and pink as the canyon below it turned purple and blue, slowly fading into an enormous, black shadow. Picturesque. It looked like a painting. My mind was playing tricks on me. I stood before this massive canyon questioning its authenticity. I asked my brother and his girlfriend to snap a photo of me. I played the part of a tourist. Before returning to the car, I glanced back one last time and reminded myself, tomorrow will be a different story. Tomorrow, I become one with that monstrosity.

Tomorrow, I will hike into its bowels and climb back out a champion.

“I guess it comes down to a simple choice, really–get busy living or get busy dying.”

I Can’t Get it Out of My Head

If I Can’t Have You – Shawn Mendes

This site is powered by a grammar vigilante fueled on: